Somebody’s Pinched My Bottom! is a fast and furious madcap comical farce of mistaken identities and misunderstandings. It takes place in the first-floor office of Theatrical Properties Ltd, a small business which hires out costumes, props and novelty party items to theatre groups, societies and individuals. Run by the fastidious Mr Jenkins and his loyal secretary Carol, the day begins badly when a workman arrives to dig a large hole in the pavement outside accompanied by a loud radio and a louder pneumatic drill. Jenkins and Carol cannot hear themselves think, let alone what their customers are asking for. Consequently a large classical bust goes to a prankster in a gaudy suit and a Mark 3 Comedy Bottom Supreme is collected by a highly dignified pompous city gent! But this is just the beginning of the mirthful mishaps. Very soon the farcical tangle includes the city gent’s neurotic daughter, his formidable wife, a downbeat carpenter and a fearsome octogenarian in full Amazonian costume! Add to this a deadly blowpipe, a broken desk drawer, a highly embarrassing party accessory and a pile of wet cement, and you have all the ingredients of a classic farce for a really good night of side-splitting laughter.

Available for performance from June 2020

Cast: 4 female, 5 male (Workman is only ever heard and not seen) 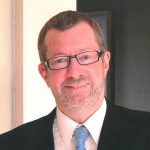 I began writing stories and books when I was about fourteen – so many years ago! Throughout my teens, twenties and early thirties I entertained myself by writing thirty-seven novels and collections of short stories. None of these were ever published. I sent one to a publisher but it was instantly rejected. I did however win several story competitions during the early 80’s, including one of five runners-up prizes in The Mail on Sunday’s very first ‘Start of a Novel’ competition.

In the late 80s I bought an early camcorder and, having always been fascinated by cinema and the film making process, I collected together a group of friends and made a short amateur film. I based the screenplay on a short story I’d written some time before (and which had actually been read on BBC Radio). More friends became interested and more films were made, totalling thirty between 1988 and 2015. In each case I would write the screenplay, produce, direct, edit and often appear in these films. None were ever publicly shown and were never intended to be: they were screened privately for the cast and friends and relatives.

By 2005 many of the participants had moved on and with a slight change of direction in mind I joined a local amateur theatre group. I loved the experience instantly and, joining a second company in 2007, began performing in five or six plays a year. (I can never do anything by halves!) I have now appeared in about sixty plays and continue to do so. I have also directed five plays.

Ironically my fellow actors learned of the earlier films I had made and expressed a great desire to appear in one. So I made three more films between 2011 and 2015, now with the actors from the theatre companies. The last of these was a ghost story called The Grey Mist…

Early in 2016 one of my theatre companies began to consider putting on a ghost play in October for the Halloween period and, having failed to find one that was both suitable and available, asked me if I could write one specifically for them. I told them the story was already written and adapted The Grey Mist for the stage. In fact the play was not performed until October of the following year. It was my first attempt at writing a stage play though clearly not my first attempt at writing.

Be the first to review “Somebody’s Pinched My Bottom!” Cancel reply