A group of seven actors have devised and are rehearsing a play about the 18th century precursor of hypnosis, Mesmer. Things start to go wrong when one of the actors has to drop out and the director steps into her shoes. Not only that, but the leading actor playing Mesmer, was once a well-known television actor, and resents her direction and stirs up trouble with the rest of the cast, and when the play within a play develops, not only does this lead to some hilarious mishaps, the Mesmer play also parallels some of the actors’ lives, resulting in some entertaining revelations.

As the Mesmer play progresses, showing Mesmer’s dramatic cure of a blind pianist leading to a scandal that rocked the Viennese court, and Mesmer’s escape to Paris in the throes of the French Revolution, the rehearsal becomes more fraught as the leading actor’s past catches up with him.

Because The Franz Anton Mesmer Show is a two-act play set in a real-time rehearsal, it is possible to perform the play in almost any venue, using a simply staged setting. 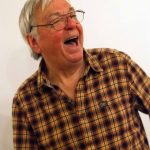 David Barry, was born and bred in North Wales, and has been an actor for more than 50 years. He began working professionally at the age of 12, and a highlight of his early years was touring Europe with Laurence Olivier and Vivien Leigh in Titus Andronicus. He also appeared on the West End stage with Paul Scofield in Graham Greene’s The Power and the Glory. In his early twenties he played Frankie Abbott in the successful television sitcom Please Sir! and the film of the same name. When he appeared in a spin-off of the series, The Fenn Street Gang, he wrote one of the episodes which was accepted by LWT and broadcast. In the mid-70s he co-wrote the sketch show The Lads from Fenn Street, in which he also toured nationally for 18 weeks with two of his Fenn Street colleagues. Then in 1980, having appeared as Elvis, Stratford Johns’ nephew, in George and Mildred – the Movie, he wrote three episodes for Thames Television’s Keep It in The Family. He always wanted to write novels, and after two failed attempts, his first novel Each Man Kills was published in 2002, followed by an American crime novel based on a true story, Willie the Actor, published three years later. In 2008 he spent a year in Aberdeen working as a Writer in Residence with children, during which time he completed a children’s book, The Ice Cream Time Machine. Since then he has written several crime novels, including Muscle and A Deadly Diversion. He also wrote the historical novel Mr Micawber Down Under which he later adapted into a play which toured south east England. In 2016, he reintroduced his Abbott character in a play A Day in The Lives of Frankie Abbott, set in a care home, which played at Edinburgh Fringe Festival and received a 5-star review. His one act-play, A Friend of Ronnie’s, also toured as a double bill, and in the autumn 2018 played for 12 performances by Newquay Dramatic Society. His latest crime novel, Walking Shadows is due for publication soon and will be available in early 2019. David also presents a weekly radio show on the digital station Channel Radio, a live show which broadcasts every Saturday lunchtime, a show in which he has had many great guests, including Tom Baker, Brian Murphy, Glen Gregory of Heaven 17, Linda Marlowe and many others.
Because of his early years as a child actor, during which his entire education consisted of appearing in plays by Shakespeare, Wilde and Shaw, and dozens of others, he has himself become an obsessional writer, and storytelling is in his blood. He lives in Tunbridge Wells, and has two grown up children.